Tuscany: New Releases from the Coast

I found a lot to like in this year’s crop of new releases from the Tuscan Coast. The best Vermentinos and Morellinos offer terrific value, while at the higher end, many of the region’s reference-point wines turned out beautifully. Moreover, a greater emphasis on freshness yields contemporary wines that marry energy with the natural opulence that comes so easily on the coast, a pretty appealing combination in my book.

I have to say, I was especially taken with the wines of the Tuscan Coast I tasted for this article, despite not having been able to travel in the region as I did regularly prior to COVID-19. But, as with many articles I have written over these last two years, I actually found tasting in a neutral setting allowed me to focus on just the samples, without any outside distractions, and to appreciate the wines in a slightly different manner than in the past.

The first thing I noticed, as mentioned above, is a general move away from the opulence of years past in favor of an approach that gives more importance to delineation and vibrancy. To be sure, some of that is attributable to the character of recent vintages, but there does seem to an effort to seek greater finesse through less extreme farming and gentler winemaking than was once the norm. Tuscany’s coastal appellations naturally produce wines of generosity and volume, so having something to counter that richness can be quite compelling, as it is for many wines in this report.

On a less positive note, I was disappointed to see the continued use of excessively heavy bottles. I always chuckle (that is a polite term) when I see an estate that touts its sustainably farmed vineyards but then uses big, heavy bottles. Ordinarily, that would just be hypocritical. But in today’s day and age, it is that and also just plain offensive. The production of glass is heavily reliant on natural resources. And then there is environmental impact of shipping these wines around the world. Even before today’s environment marked by soaring inflation and war in Ukraine, the precarious position of the world with regards to climate change demands a more sensible and thoughtful approach to packaging. It’s time for those oversize bottles to go. 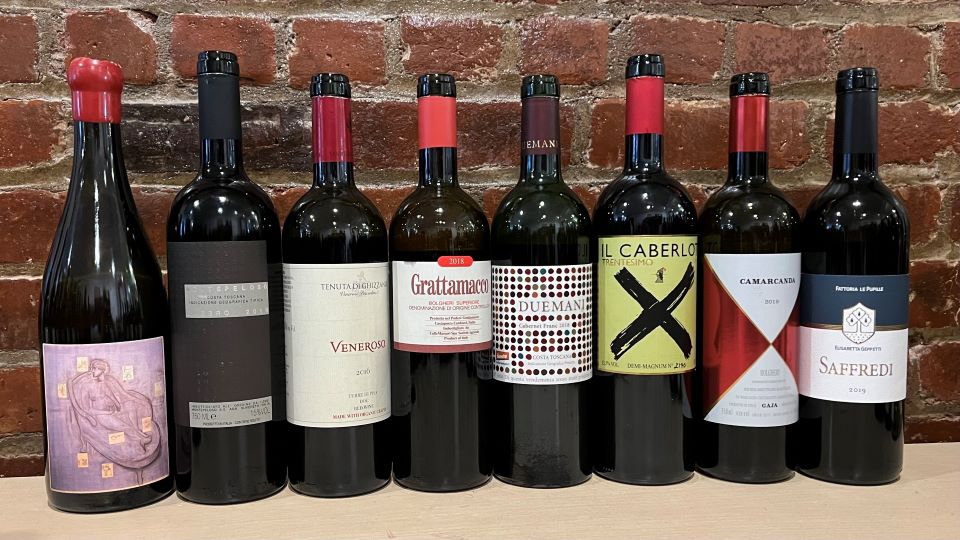 Tuscany is a very large region, so vintage descriptions are general at best. Even so, it seems pretty clear to me that 2019 is more exciting on the coast than it is inland in regions such as Chianti Classico. The 2019s are aromatic and a touch lighter than most years, but that is not a bad thing here, while quality is more consistent than it is elsewhere. After a wet and cool spring, most winemakers reported more favorable conditions in summer, with less rain than seen in inland regions and diurnal shifts at the end of the season, which led to a slightly later harvest by present-day standards. The balance of the best 2019s is compelling.

Two-thousand eighteen is an irregular vintage marked by a cool growing season and quite a bit of rain. Quality is inconsistent, and yet the top estates found a way to make gorgeous wines in the restrained style of the year. It’s too early to have a complete view on 2020, but the first releases I have tasted suggest a vintage of mid-weight structure.

Although this article focuses on the coast, I have also included a number of wines from regions further inland, closer to Chianti Classico. For the sake of both completeness and easy reference, all reviews previously published in my 2019 Tuscany Preview article have been moved into this report.

© 2022, Vinous. No portion of this article may be copied, shared or re-distributed without prior consent from Vinous. Doing so is not only a violation of our copyright, but also threatens the survival of independent wine criticism.